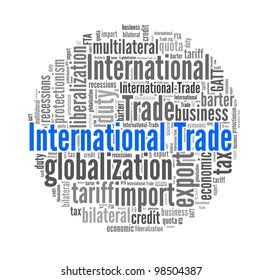 The Theories Of International Trade

Major Facts To Know About The Theories Of International Trade.

Trade is the oldest and most important interdependent nexus between and among nations, and recently non-state economic actors.

The many theories, though interrelated, are vital if we must understand better the subject matter
from its many sidedness. In a fastly changing world economic system, international economic relations have passed through many phases of free trade, economic nationalism, oligopolistic policies,
ecónomic bloc buildings and strategic trade policies. In particular.

the highly developed countries or states have evolved deliberate political policies to encourage and protect further strategic trade policies of their firms?. The United States of America (USA), Japan
and European Union have led the way towards the greater openness of world economy to the flow of capital, trade, foreign direct investment, science and high-technology and market integration.

In this chapter, the theories of international trade are presented in rather an evolutionary than structural approach. This is not to say that there is an absolute dividing line between what is evolutionary and that which is structural. We shall present the theories as follows:

A) The Liberal Theory

The liberal theory simply makes a case for free, non-protectionist trade policies and behaviours. It was developed by Adam Smith in his famous book, An Enquiring into the Wealth of Nations in 1776′
For Adam Smith, free trade policy remains the key to national wealth and power, because it encourages economie growth and competitive development.

According to the liberal theory of trade,
free trade policy means that nations are at liberty to specialize by the process of division of labour in what they are by abilities best fitted.

Discernable elements of the liberal theory are that:

i) labour is the measurement of ability. It is labour specific, and tends more to ignore other factors of production

ii) free trade without restriction creates an absolute advantage that derives essentially from a territorial division of labour.

iii) an absolute advantage in free trade is a function of the scale of the market.

iv) the role of the state in a free economic system is that of a referee or an umpire. As Adam Smith would put it, a government that intervenes least governs the best.

(This is the cornerstone of the capitalist philosophy).

The liberal theory of trade assumes that every nation is similarly endowed with competitive labour abilities. The extreme focus on labour theory in the 18th’ and the early 19th centuries was too limited
to accommodate other factors of socio-economic formation in our complex economic system.

A built on the liberal theory was made by David Ricardo in the 10th century.

B) The Comparative Advantage Theory

The comparative advantage theory is rather a more scientific modification of the liberal theory of trade”. It is not wholly opposed to free trade but the assumption of an absolute advantage.

According to Ricardo in his Principles of Political Economy and Taxation, trade is mutually beneficial. In his law of comparative advantage, Ricardo demonstrated that the flow of trade among countries is determined by the relative and not the absolute cost of the goods produced?.

International division of labour is rather on comparative cost, in which case countries will tend more to specialize in those commodities whose costs are comparatively lowest, with the highest profits possible. Ricardo observed this ingenious approach from the fallouts of the industrial revolution in the 19th century with rapid growth of industries.

In this way, every nation has something to offer to
international, division of labour and exchange relations. Every country becomes an exporter and importer’. Thus far, the world community becomes one of international producers and consumers.
Ricardo himself notes:

Under a system of perfectly free commerce, each country naturally devotes its capital and labour to such employments as are most beneficial to each. This pursuit of individual advantage is admirably connected with the universal good of the whole.

By stimulating industry, by rewarding ingenuity,
and by using most efficaciously the peculiar powers bestowed by nature, it distributes labour most effectively and most economically: while, by increasing the general mass of productions, it diffuses general benefit, and binds together, by one common tie of interest and intercourse, the universal society of nations throughout the civilized world. It is this principal.

which determines that wine shall be made in France and Portugal, that corn shall be grown in America
and Poland, and that hardware and other goods shall be manufactured in England” 76). (Ricardo, 1871 (1817]. pp. 75-76).

While working out and demonstrating this law, Ricardo used his famous example of Portuguese wine and English cloth. Portugal, he reasoned, could produce both wine and cloth more cheaply than
England. However, since Portugal had a comparative advantage in the production of wine because its soil and climate enabled it to produce wine even more cheaply and efficiently than cotton, it would gain more by specializing in the production of wine and importing cloth from England than by producing both.

England would gain by specializing in cloth and importing wine. This idea of the “gains from trade
was truly revolutionary. Paul Samuelson has called the law of comparative advantage “the most beautiful idea in economics.

Edet Akpapan uses trade behaviours between Nigeria and Cameron to illustrate the value of comparative costs.

In this case, the theory says that it would still be better for both countries if Nigeria specialized in one, allowing Cote D’ Ivoire to specialize in the other.

The benefits are usually shown by working
out the opportunity cost ratios in both countries. With our data these would be determined as follows.

Cote D’ Ivoire gives up 0.875 kg. of C. Nigeria has
a comparative cost advantage here (i.e., in the production of G) because it gives up less C than Cote D’ Ivoire does.

This was the way Ricardo and his followers explained the occurrence of trade and the way countries would gain from it Some of the pitfalls of the theory of comparative cost are that:

a) it is still based on labour theory of value.
b) it omitted the cost of transportation
c) it assumed that the factors of production are immobile, and thus domestic-centred on two countries such that it could not be transformed from one country to another.

Neoclassical theory is otherwise known as the factor proportions theory or the standard liberal theory. It was first developed by two Swedish economists.

Eli Heckscher (1919) and Bertil Ohlim- (1933)”
• It was later modified by Paul Samuelson (1948). The neoclassical reformulation has become known as the Hockscher-Ohlin-Samuelson (H-O-S) theory or model of international trade and Neoclassical theory or the H-S-O. model recognizes other factors of production, including transportation which make for greater mobility of international division of labor and exchange relations The concept of relative-factor endowment is held as explanatory to trade flows.

This theory, which assumed mathematical and statistical techniques in the 1980s, assumes that factors of production such as capital, labour, resources, management, and technology-condition a
nation’s comparative advantage.

The concept of labour has been modified to human capital, and cost has been redefined as “opportunity cost”.

As countries are not similarly endowed, so there
are bound to differ in comparative costs. This in turn encourages greater flows of international trade
Edet Akpapan simplified the impacts of factor proportions theory.

Countries that have more labour than capital will have relative cost advantage over others if only they should concentrate on labour-incentive production regimes. In this rational choice, the surpluses from export will be used to pay for imports from other
countries. The same will apply to countries that have more capital than labour.

It pays such countries more to adopt capital-intensive production of goods and services, which will provide surpluses to export. In this way, trade will spread benefits across national borders
particularly in non-restrictive trade barriers.