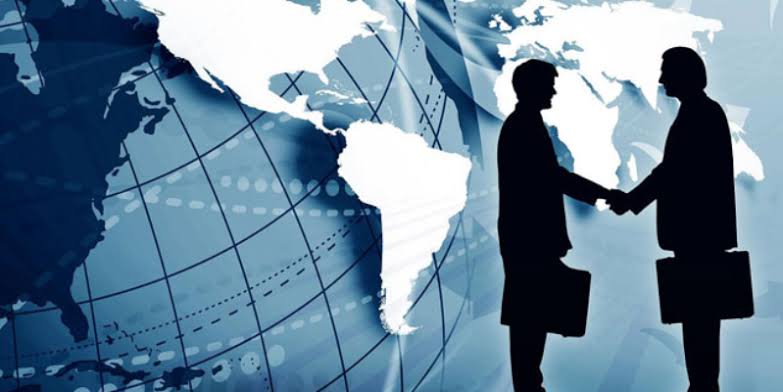 in this post we’d clearly talk about the study of International Economic Relations.

This chapter signposts the many dimensions in the study of modern international economic business *relations. For clarity, international economic relations is not an absolute study in economics. It is heavily political too’ Our knowledge of political
economy enhances the appreciation that ‘economics’ and politics’ are strong correlates?

What we often talk about as an economic policy is actually the handicraft of politics. It is the political that determines what is to be produced; which economic sectors of investment; the direction of export-import behaviours; the nature of strategic trade policy; the legislation on the entry and activities of multinational corporations (MNCs); regional integration and financial ties in the world economic system.

Politics is a key element in understanding the past, present and future trends of national and international production regimes, market integration and market offerings’.

Just as politics acts upon economics, the latter strongly impacts on the former.

Economics defines not just the national production system of a country and how to reproduce it, but really the wealth of the nation.

Thus far, economics is the production base, or substructure that serves as an instrument or a tool for achieving political objectives, and indeed the goals of external military engagements.

In foreign policy analysis, the nature of a nation’s economy is vital in determining the projection of power from either position of strength or weakness. Economics measures the wealth and influence of a nation*.

It is a weapon for extending or receiving economic
assistance, foreign aid, external debt and debt relief, economic sanctions Or economic warfare. Whether, country is technologically advantaged or disadvantaged is a function of the interplay of politics and economics.

Tom the foregoing, it is possible to attempt, at least, a definition of the subject malter. International economic relations measures the interplay of *politics”economics’ in determining national
and international production systems. particularly the flow or international trade, capital, foreign direct investment, science and lechnology.

strategic trade policies, economic integration and marke The dynamics of international economic relations is not lawless. Hence, there is the protectionist angle to the study.

The focus on trade is to understand the export-import behaviours of nations across frontiers. It includes chiefly the functions of industrial organizations within and between nation states, which may account for differences in strategic trade policies across national frontiers.

International trade also accounts for the overseas
expansion of MNCs or even firms in particular sectors such as automobiles, telecommunications, consumer tools, armament and ammunitions.
durablès. machine The complex interdependence of the present world market economy makes international trade more significant, particularly on
how trade policies impact on the operations of the world political system; the function of world economy; the global business and diplomacy, and the central question on security and power, and our
collective welfare”.

For the advanced industrial economies, MNCs facilitate international trade at both cross-country and cross. continental. According to Marc. Humbert, the boundaries between national economies are fastly obscure as there is growing interpretation of their territorial apparatuses of production.

Increasingly, foreign direct investment affects governments and the private sectors across national frontiers. It is accompanied more by strategic trade policies” • Both national governments and their
firms are similarly concerned about policies designed to protect investments within and between countries FDI promotes international flow of capital and financial ties among and between countries.

The leading facilitators of FDI are the U.S.A Japan and European Union (E.U).

Modern production -system is heavily technological. Indeed. technology has permeated every production process. It determines the strength or weakness of national economies.

The overall strength of the present world economic system is technology-path dependent.

Scholars have generally recognized a high-tech race to enhance both national and international competitiveness in production and exchange relations.

Today, there is an increased research and development (R&D) spree by both states and firms. This has arisen from a number of variables or forces such as:
i) time compression and
¡i) the shortening of the life cycle of technologies

Global competition in industrial development is more than rivalry Both states and firms would ‘want’ to corner the market, or belong strongly to the market system and/or gain more market power.
Arising from increased application of technology to production, oligopolistic competition is gradually shifting to • international cooperation; linkages and alliances between big firms worldwide.

This complex process is a clear definition of modern international economic and business relations m
Countries and firms employ science and technology to produce economies of scale and to build up to date production apparatuses in order to catch with the production pressures of both regionalization and globalization. A him’s capabilities to seek and locate corporate platform globally have a more profound effect on today’s world trade

Free trade philosophy is a typical capitalist ethics in the linkages between national and international economies It makes a strong case for minimal restrictive policies in trade and the flow of capital
and labour.

The soul essence is to increase competiveness across
national frontiers. The beneficiaries are the leading capitalist countries. The socialist-market economies and the less developed countries (LDCs) are in the disadvantage. Hence, economic nationalism or neomercantilist policy is a check on free trade
philosophy.

Strategic trade policy is a position of the leading developed countries and their firms to exercise effective minimum restrictive policies, which still allow greater intra and inter-firms competition within and between states.

which have the potentials of reflecting the present, architecture of the global economic village.

Comprehensive rules and regulations are
needed too in a variety of non-border policy areas. This policy option is not really to the advantage of the vast majority of the developing and underdeveloped countries.

Yet, the dynamics and realities of the present global economic village are not waiting for any national economy. It is already a dynamic process that appears to be self-propelling and self-determinist. Lines of gains or losses are highly predictable.

Strong and weak economies are not in doubt of their possible gains or losses in international division labour and exchange relations.

In seeking a better understanding of international economic relations, we have tried in the preceding introduction to clear one possible misconception of the subject matter.

It is all about a game mations play. The title suggests it: inter-national. This notion is a misnomer. International economic relations is not a game of nations only as the acronym suggests, The actor composition comprises nation states and non-state economic actors Nation-state economic actors are certainly the dominant policy oriented actors.

They are sovereign and independent states, without
prejudice to size: wealth, population, religion, nationality and creed.